Sorry, this product is no longer available, Please, contact us for a replacement product!

The EGS5212FP is a full featured Gigabit Ethernet switch with comprehensive Layer 2 switching capabilities and PoE+ support. It provides 8 Gigabit ports that support IEEE802.3at/af PoE+, two 1 GbE connectivity for uplinks that allow SMBs to deliver higher bandwidth for congestion relief and 2 SFP slots for fiber transceivers that can extend the reach of the network beyond the limitation of Ethernet cabling. With rich Layer 2 management features, the EGS5212FP allows quick deployment and simplified maintenance as well as seamless upgrades, making it the ideal networking solution for businesses looking for the best combination of features, performance and value.

This EnGenius Layer 2 Switch is designed for easy network management and can quickly be added to an existing rack of other branded L2 and L3 switches. Configuring the switch is made through an intuitive and user-friendly Web interface for quick and easy management. The EnGenius L2 switch also includes SNMP (v1, v2 and v3) to collect and track data to monitor network health, manage devices, and more easily enforce critical IT controls and policies. The switch’s Link Layer Discovery Protocol (LLDP) feature allows it and other network devices connected to it to announce and display their identity and capabilities on the local network, which helps IT managers better manage, troubleshoot or correct issues that may arise on the network.

The EGS5212FP provides support 802.1Q VLANs for improved convergence and bandwidth utilization. The switch automates the process of setting up VoIP devices on a network. Voice VLAN guarantees clear quality and efficient transmission for all voice communications. VLANs also provide a means of securing each broadcast domain, segregating them from each other. VLANs can be configured to segment departmental resources. VLANs implemented on an SMB network help to restrict access to sensitive information from one department to another.

The EGS5212FP supports IGMP Snooping, MLD Snooping, and VLAN for multicast applications. By passively snooping IGMP packets transferred between the switch and the IP multicast host, registration information is recorded and sorted into multicast groups. The switch can then intelligently forward traffic to only those ports that request multicast traffic. MLD Snooping enhances efficiency in selective distribution by forwarding IPv6 multicast data to receiving ports, rather than flooding all ports in a VLAN.

Priority queueing ensures high-priority traffic gets delivered efficiently, even during congestion from high traffic bursts. The ability to prioritize traffic ensures quality of latency-sensitive services and applications despite increasing traffic loads. For mission critical environments, the EGS5212FP supports 802.1D, 802.1w and 802.1s Spanning Tree Protocols (STP). STP allows you to configure the switch with a redundant backup bridge path, so transmission and reception of packets can be guaranteed in the event of any failed switch on the network. To help streamline networks, 802.1p Priority Tagging places a priority tag in a specified frame placing it in a priority queue once received and enabling it to be prioritized ahead of other frames. IEEE 802.1p enables administrators to assign and designate traffic priority. This process helps applications such as VoIP and video conferencing to be delivered clear and jitter-free.

This EnGenius Layer 2 Switch is capable of conserving power without sacrificing operational performance. With the Energy Efficient Ethernet (EEE) standard, the network will automatically decrease its power usage when traffic is low with no setup required. The PoE Management feature lets IT managers control the PoE on each port so that unnecessary power consumption can be saved during off hours. The switch can also detect the length of connected cables to automatically reduce power usage on shorter cable connections.

With a total power budget of 130 Watts for the EGS5212FP, customers can choose to plug in up to eight 802.3at/af IP-based devices. Power-over-Ethernet (PoE) optimizes the installation and power management of network devices such as wireless Access Points (APs), Voice over IP (VoIP) phones, and IP-based surveillance cameras. In addition, the EGS5212FP’s Power-over- Ethernet (IEEE 802.3at/af) capabilities reduce installation time and costs for many new network productivity devices. Free your wireless AP deployments and IP cameras from the restrictions of power outlet proximity using a standard Cat 5 cable. 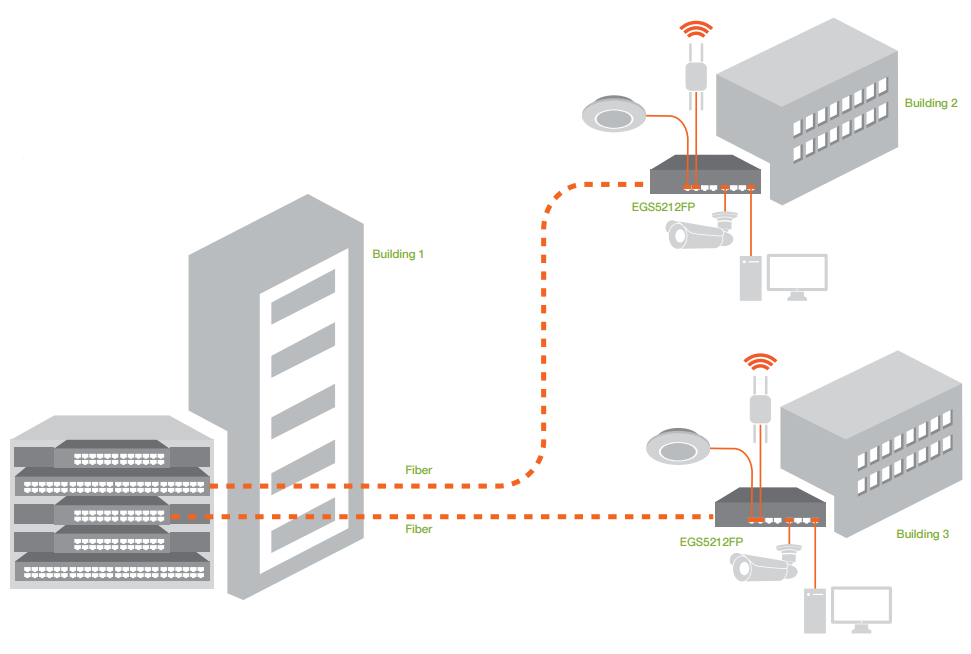 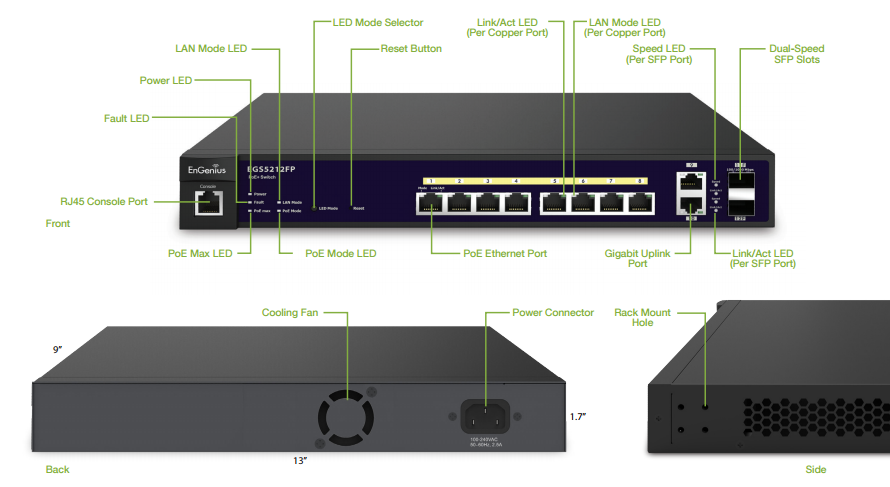